I received this book to review through Beck Valley Books Book Tours, I have volunteered to share my review and all the opinions are 100% my own.

The voice was disguised.…

The agonizing message was not.

Alex gets a call no parent should ever receive. It’s a dagger to her heart. But she can’t afford to stop.

Forced to carry out the wishes of the captors, Alex is threatened at every turn. It defiles her, but she’ll do anything to get her daughter back. Will it work?

The treacherous journey is never-ending. Her life is threatened, but she brushes it off. The connection to her family member is still strong. But will she ever see her again?

An Amber Alert in San Antonio — and Ivy Nash intercepts the assailant. But the story behind the story grabs her by the throat. Would a mother actually do such a thing, or is this simply a custody issue?

Two paths intersect, and neither Alex nor Ivy will back down. They must save the lives of these young girls.

The opioid crisis devours people by the thousands. And those behind it slither around like snakes, using the addicted like they’re animals on the end of a leash. Can anyone stop the cycle of abuse?

It all has to stop. One life at a time. One daughter at a time. Alex and Ivy will either succeed or die in the process.

Who will make it out alive?

But in the end, could there be one shining moment?

Get Back AT You now!

Now this is what I am talking about. Back AT You took us back to the edge of your seat intensity and suspense that I love so much about John W. Mefford’s writing.

Back AT You didn’t include one of my favorites – Ozzie – but did team up our two heroine’s with action, suspense, mystery and a shocker like no other.

I really enjoyed this installment and could not put it down.

The ending left me on the edge of my seat wondering what is in store next and I cannot wait to continue this series.

Each one gets better and this one definitely tops them.

I look forward to continuing my journey with Alex and seeing what happens next. 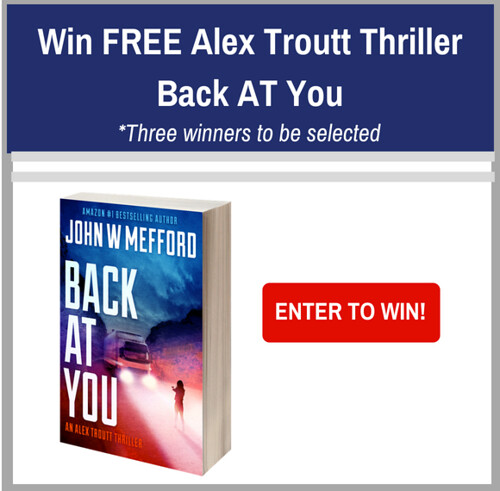 « Can Do Kids by Kayla J. W. Marnach {Children’s Book Review}
Boy on the Beach by R.D. Maddux {Book Spotlight} »