Brought to the Caribbean island of Dominican Republic on the premise that he could finally close the chapter on the darkest moment of his life—and rid the world of a cold-blooded killer—Booker T. Adams instantly finds a far different scene. Set against the backdrop of a city consumed by the rising fear of terrorism and a brutal drug lord, a woman, seemingly with two lives and even two faces, uses her hypnotic charm to get what she wants, sending Booker on a mission to rescue a teenage boy held hostage.

Befriended by a fired cop and a homeless kid with nothing to live for, Booker struggles to understand fact versus fiction, while staving off wild bores, snakes, terrorist traps, and a past that has haunted him for almost thirty years. Is he dealing with people believing their own hypocrisy, or have they simply perfected the art of betrayal and treachery?

The all-powerful rule with brute force, killing women and children like they’re swatting flies. It’s a savagery that Booker can’t comprehend, let alone defeat. With the smell of death stuffed down his throat, the man with everything to lose puts everything on the line—because he can stand…

Available to buy at…

Booker: No Mas doesn’t hesitate with the action, thrill, and suspense.

The book starts right off with action. I had to re-read it a few times just to make sure I was following along! I thought Booker was dreaming or something, but no such luck. He was living it!

I am a romantic at heart so I was really hoping we could jump in right where we left off, but apparently, Booker received a phone call that put my wants on hold… and of course sends him on a new case that leads to another case.

As with the other books in this series, there is more than one crime to figure out and as usual, I can never figure them out until the end. Usually right before Booker himself figures them out!

I don’t want to give off too much information and spoil anything because this really is a book that you should read. Just know that Booker’s past collides with his present.

Although this can be read as a stand alone, you are definitely going to want to start from the beginning of the series. This is one of those series that you don’t want to miss anything and because his past is ever present in this book, knowing the who’s, the what’s, the where’s, the why’s, and the how’s will definitely make you feel better!

Check out the other books in the series

A veteran of the corporate wars, former journalist, and true studier of human and social behavior, best-selling author John W. Mefford has been writing novels since he first entered the work force twenty-five years ago, although he never put words on paper until late 2009.

John writes novels full of intrigue, suspense, and thrills, but they also evoke an emotional connection with the characters.

When he’s not writing, he chases three kids around, slaves away in the yard, reads, takes in as many sports as time allows, watches all sorts of movies, and continues to make mental notes of people and societies across the land.

John lives in Frisco, Texas with his beautiful wife, three opinionated kids, and a feisty fat cat who rules the world. 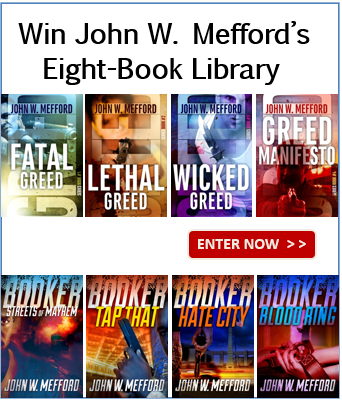