Another amazing thriller read from John W. Mefford. Check out our review below and be sure to snag a copy of the book! You don’t want to miss this one!

And the cries from below are slowly devoured by the howl of a coyote.

Willow Ball and Cooper Chain are tied at the hip — on some days that’s a fantasy, other days a curse.

But there’s one thing they agree on: if they hope to outsmart a ruthless crime boss, luck will have to fall their way.

You will devour this book if you’re a fan of the Fox & O’Hare novels by Janet Evanovich and Lee Goldberg, Michael Connelly’s Ballard and Bosch, David Baldacci’s King and Maxwell, Tess Gerritsen’s Rizzoli and Isles, or the TV show “Castle.”

It’s no secret that I am a big fan of John W. Mefford. In fact, the is my favorite thriller author. But I’m going to be honest; the start of this book had me a little worried that John was losing his touch.

It left me breathless and shocked; speechless; sitting on the edge of my seat.

I don’t think my mind would have ever gone where the mystery led us. I actually thought that Cooper was wrong for having issues and disliking the character. I thought it was all in Cooper’s head. Never did I see where the book led us.

I love seeing Willow and Cooper working together and getting closer. If you haven’t read the previous books, spoiler alert; Cooper’s daughter, Lauren, is a big part of Bury and I am enjoying seeing that work itself out.

We didn’t get as much of the same bad guys (just a little) but now that I sit back, I feel one mystery was left unresolved and maybe that will come to fruition in the next series.

Hands down, John W. Mefford writes amazing series and the Ball and Chain series is no different! (Well, it is different as the writing style is different than some of the past books, but it still has amazing thrill, suspense, and mystery!)

A father goes missing. Not just any father. But a person once worshipped for his world-class talent. 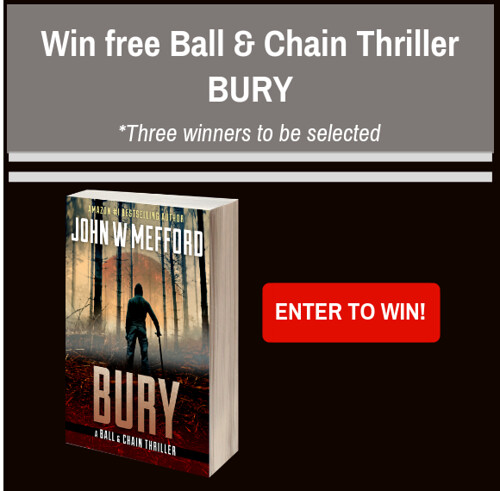 « It’s Murder My Son (A Mac Faraday Mystery, Book 1) by Lauren Carr {Book Review}
Please Explain Time Out to Me: A Story for Children and Do-It-Yourself Manual for Parents by Laurie Zelinger and Fred Zelinger {Guest Book Review} »