John W. Mefford is back with an intriguing new thriller – The Ball & Chain series. Read more about our thoughts on Book 2 of the series!

A father goes missing. Not just any father. But a person once worshiped for his world-class talent.

If you’re a fan of Michael Connelly’s Ballard and Bosch, David Baldacci’s King and Maxwell, Tess Gerritsen’s Rizzoli and Isles, and the TV show “Castle,” you’ll be enthralled by this gut-busting Ball & Chain thriller.

*Warning: The Ball & Chain Thrillers are full of white-knuckle suspense and sarcastic sass. Proceed with caution.

I read Book 1 in the Ball & Chain series and felt we were missing things that thankfully, we started to get a little bit of in Book 2.

We continue to see the light-hearted banter with slight romantic jist between Cooper and Willow while we follow them on a crazy journey that the seem to just ‘fall into’.

Cooper and Willow remind me a lot of Alex and Ozzie, but with a history of their relationship and a bit more… future between the two of them.

Unlike our previous friends (police, HALO, private investigator); Cooper and Willow really have no business getting wrapped in such troubling events yet they seem to find themselves in the midst of them all of the time!

This time, we are looking for a missing father. More or less because of Willow’s big heart and because the same missing man is the main character in Cooper’s new article. But, he’s missing.

Unbeknownst to them; there is much more to the story and they fall into some crazy stuff.

The relationship and razzing of Willow and Cooper keep me entertained and intrigued. The tossed in pieces of the whats at the end of the rabbit hole keeps me on the edge of my seat – curious as to how all the pieces of the puzzle fit together.

I find the Ball & Chain series to be different than before (but again, Cooper and Willow don’t belong in these situations like past characters) yet the stories are just as thrilling and suspenseful as the previous books by John.

I have said it before, I will say it a million times more. John is my favorite author when it comes to thrillers and FEAR did not disappoint.

If you’re a fan of Michael Connelly’s Ballard and Bosch, David Baldacci’s King and Maxwell, Tess Gerritsen’s Rizzoli and Isles, and the TV show “Castle,” then you’ll be sucked into this first, page-turning Ball & Chain thriller. 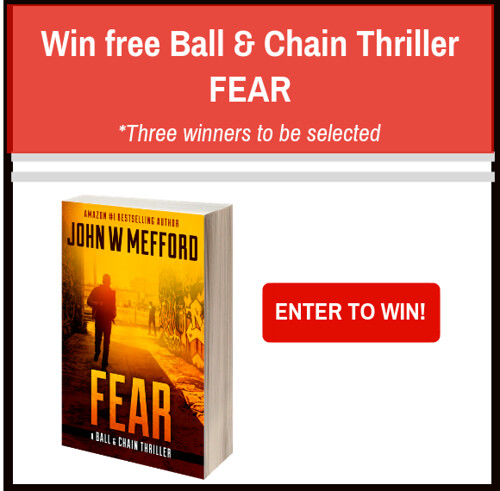