The Thirteenth Guardian was a bone chilling, end of the world, read that kept me glued to the edge of my seat! Read our review below!

Disclosure: I received this book to review through Prism Book Tours, I have volunteered to share my review and all the opinions are 100% my own.

DA VINCI’S SECRET PALES. Michelangelo concealed an explosive truth in his famous Creation of Adam fresco in the Sistine Chapel. Eve did not cause the fall of man. She carried a far more devastating secret for millennia—one that will change the world forever.

As the modern-day world suffers the cataclysmic effects of the “Plagues of Egypt,” Avery Fitzgerald, a statuesque Astrophysics major at Stanford, discovers that she is mysteriously bound to five strangers by an extremely rare condition that foremost medical experts cannot explain. Thrust into extraordinary circumstances, they race against time to stay alive as they are pursued by an age-old adversary and the world around them collapses into annihilation. Under sacred oath, The Guardians—a far more archaic and enigmatic secret society than the Freemasons, Templars, and the Priory—protect Avery as she embarks on a daring quest that only legends of old have been on before. Avery must come to terms with the shocking realization that the blood of an ancient queen flows through her veins and that the fate of the world now rests on her shoulders.

The Thirteenth Guardian is Book One of a daring new Trilogy that will shake you to your core.

I have to admit right off the bat that this was an anxiety inducing, scary read for me personally. Apocalyptic, end of the world, death type things have a way of throwing me into an anxiety attack and make me incredibly fearful and that is exactly what this book did.

The beginning was a little strange and I was concerned where it was going, but it immediately thrust me into this end of the world situation that I got sucked into and could not stop reading. I had to know what was happening, how people were going to survive, why certain people were meant to survive – it was a crazy suspenseful read.

I really wanted to rate the book a full 5 stars, but the ending got a little too religious for me and I felt rather lost. And the ending was… well, abrupt. It just – ended.

This is clearly meant to be a cliffhanger ending and it very much achieved that. I really do want to continue reading more to see where this journey is going now that I have started the journey.

If Dystopian, end of the world suspense and thrill are your thing – this book is right up your alley. I would not recommend it for “young” readers (aka, my teenager and pre-teen who love to read) but would definitely recommend for adults. It was, overall, a great read.

K.M. Lewis has lived in multiple countries around the world and speaks several languages. Lewis holds a graduate degree from one of the Universities featured in his book. When he is not writing, Lewis doubles as a management consultant, with clients in just about every continent. He does much of his writing while on long flights and at farflung airports around the globe. He currently resides on the East Coast of the United States with his family. 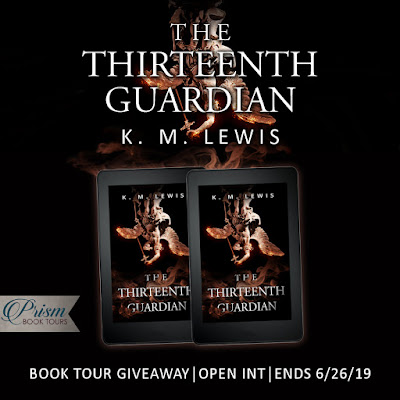 Two winners will receive an ebook of THE THIRTEENTH GUARDIAN
Ends June 26, 2019